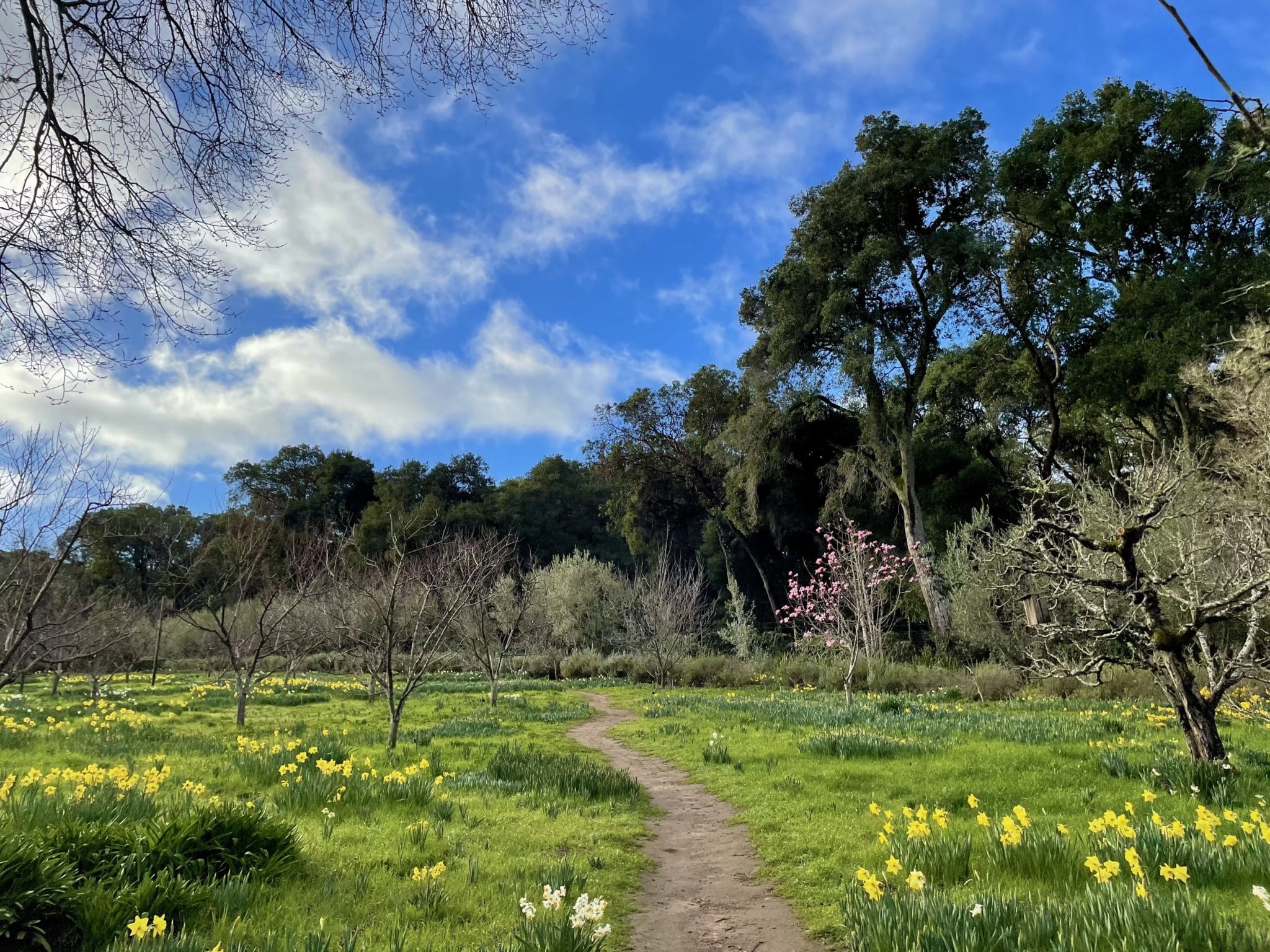 What better way to start the new year, and the daffodil season, than to visit Filoli in late February and March to enjoy our flower fields and learn about Filoli’s amazing collection.

What makes Filoli’s daffodil collection so significant is that the original bulbs are still here, growing in the same spots they were planted by an earlier generation of gardeners. Many cultivars have survived the test of time. When the modern English daffodils were created, daffodils were brand new and just coming into popularity as important garden plants.

What was modern then has become historic now. Today, Filoli preserves 37 cultivars on the American Daffodil Society historic daffodil list. However, many of Filoli’s daffodils are yet to be identified. They wait like hidden treasures to be rediscovered and maybe even reintroduced back into gardens of the future!

Many of Filoli’s daffodils were planted almost 100 years ago. That was during the “Great Daffodil Renaissance,” when estate owners like the Bourns, the DuPonts, and the Rockefellers were planting whole hillsides and fields with a new, modern type of daffodil from England. Daffodils were a hot new plant then, and wealthy collectors paid large sums for single bulbs.

It wasn’t until the mid-19th century that daffodils were used much as garden plants. The old-fashioned ancient types — like the Tenby daffodil (Narcissus obvallaris), lent lilies (N. pseudonarcissus subsp. pseudonarcissus), the yellow trumpet ‘Maximus,’ and the species narcissus which naturalized throughout the English countryside — grew more like wildflowers.

William Backhouse, Peter Barrs, and Edward Leeds are all given the credit for popularizing daffodils. The seedlings they developed between 1840 and 1860 eventually became important parents of the daffodils we grow in gardens today. These men were country gentlemen and nurserymen and absolutely devoted to the passion of “improving” daffodils. These early English hybrids were classified in horticultural groupings and listed in catalogs as Narcissus Leedsi, Narcissus Barri, Narcissus inconspicuous, and star daffodils, and were shipped to America for planting in public parks and in private estates like Filoli.

Another important English hybridizer, Percival D. Williams, hybridized and ultimately registered 242 daffodils with the Royal Horticultural Society during the early 20th century. Four of his daffodils — ‘Cragford’, ‘Halvose’, ‘Peeping Tom,’ and ‘Trevithian’ — are extant bulbs and growing in various places throughout the garden and on the grounds at Filoli.

Once the containers have finished blooming, they return to the nursery to allow them to die back. Later in summer, the bulbs are harvested from the containers and organized. In fall, the final planting destination for all the daffodils is determined. Our go-to location is to fill in any gaps that have appeared in the Daffodil Meadow west of the Yew Allée, but we will also plant them around the Visitor Center and along the north entry road.

Since 2016, donor Jan Stewart has contributed $1,000 each year — often corporate-matched for an additional $1,000 — toward our daffodil program. The gifts have purchased bulbs that have been planted throughout the property, from the Entrance Gate to the Panel Garden. In 2017, we planted a combination of ‘Carlton’ (1927) and ‘Dutch Master’ (1948) totalling 12,000 bulbs, and, in 2018, we planted the mix of pink daffodils that line the path from the Visitor Center to the Front Drive.  Visit the Daffodil Fund page to share your support.

Each year we publish a Spring Display List which lists all of the bulbs that comprise the current spring season display, plus locations and names of bulbs recently naturalized around the estate.  For more information on daffodils, visit the American Daffodil Society website, and for information on specific daffodil varieties, including their history and parentage, visit the American Daffodil Society DaffSeek page.