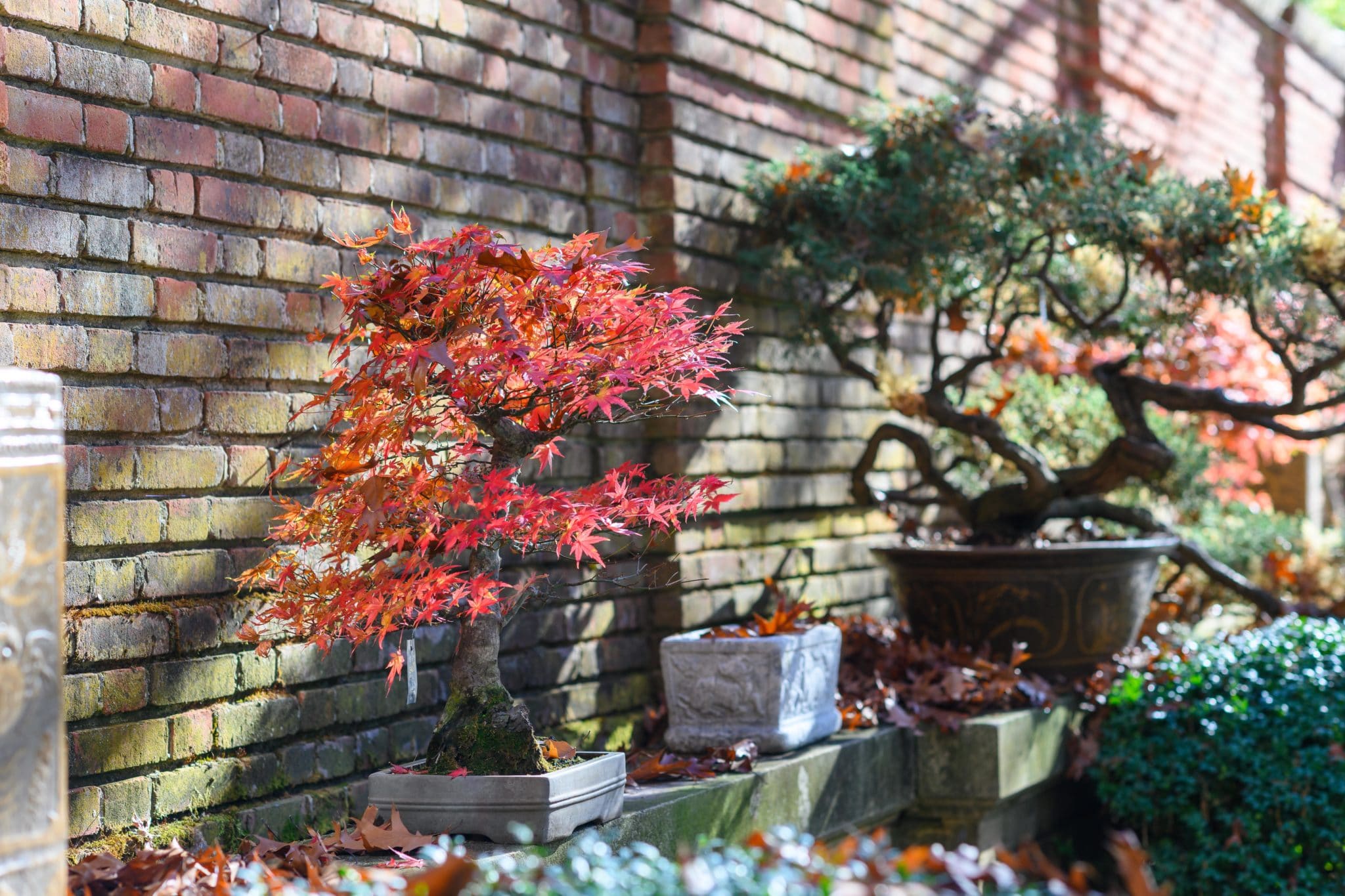 Did you know that Filoli’s collection includes more than 50 bonsai? They’ll be on display through the end of February in the Garden House and on the Dining Room Terrace.

Learn More about the Bonsai Exhibit

Bonsai plants are artful miniature replicas of full-grown trees in nature. To shape them, horticulturists prune the roots and train branches by wrapping them in wire.

The art of creating miniature landscapes, called “penjing,” originated in China more than 1,000 years ago. The Japanese further developed and popularized the art form, using the term “bonsai,” which translates to “tray-planted.” One of the earliest Japanese depictions of dwarfed potted trees is in the Kasuga-gongen-genki illustrated scroll, created in 1309.

In the late 1800s and early 1900s, the art of bonsai was introduced to the United States and Europe through exhibits at international expositions. The Bourns, who were supporters of the 1915 Panama-Pacific Exposition, might have seen the impressive, century-old bonsai that were exhibited there at the Japan Pavilion.

Filoli’s bonsai exhibit features both single-tree and forest styles. When creating the shape of a single-tree bonsai, the artist works to reveal the plant’s inherent nature: an upright trunk conveys balanced strength, a curved trunk indicates flexibility in changing circumstances, and a cascade to the side signals tension and transformation.

Open space between the branches and the correct scale of leaves to the trunk are important aesthetic considerations. The choice of container is also essential; usually earthenware, the pots or trays are chosen with dimensions, shapes, and colors to harmonize with the tree. Bonsai are designed with a designated “front” side as the proper viewing angle.

Bonsai can live for a century or more, and thus are often passed down as family treasures. Toichi Domoto, a nurseryman who supplied plants for the Roth family, received a venerable trident maple bonsai from his father. The tree had survived the foreclosure of his father’s nursery during the Great Depression, but was threatened again when the Domoto family was forcibly incarcerated during World War II. Toichi left the bonsai with an employee and returned to find that it had broken out of its container and sent roots into the ground.

It took Toichi decades to restore the maple to its original state. When pruning bonsai, he kept in mind that “you never look down on a big tree unless you’re in an airplane — you’re always looking up. So if you’re trying to miniaturize it, you should imagine it as seen from the ground level, looking up.”

After his death in 1992, Toichi’s family donated the maple to the Pacific Bonsai Museum and gifted other camellia bonsai from his collection to Filoli. Today, our garden staff maintain the modern and historic collections with help from bonsai specialists, featuring the plants as garden ornaments and integrating them into Filoli’s English-style garden.